no images were found

A little bit of WWII and photographic history for today.

This past Monday morning, the day after the Marine Corps Marathon, I made the effort to walk over to the Iwo Jima Memorial (Technically, the Marine Memorial) to photograph it. Its been on my “must shoot” list since I read the book, “Flags of Our Fathers,” by James Bradley, the son of John Bradley, one of the flag raisers depicted in the iconic photograph taken by Joe Rosenthal on Mt Suribachi in February of 1945 (below). It is, by far my favorite photojournalism image ever. 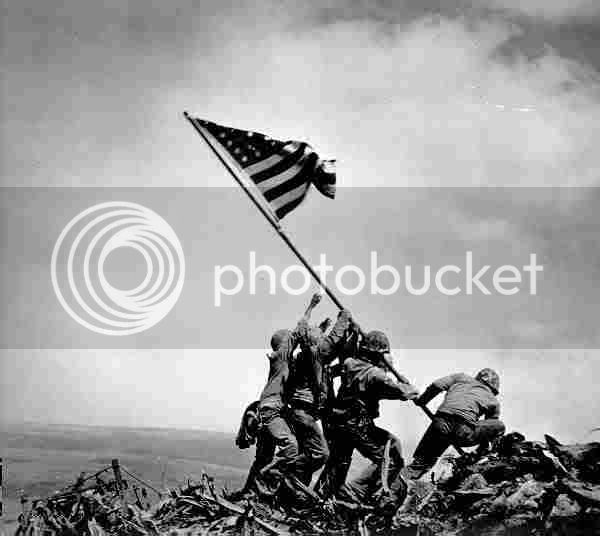 The movie was good, as was “Letters from Iwo Jima,” but the book is the way to go.

The book provides incredible insight into the lives of the six flag raisers (Bradley, Renee Gagnon, Ira Hayes, Franklin Sousley, Harlon Block, and Mike Strank) and the impact the ensuing celebrity had on their lives (those who survived Iwo Jima).

The book also provides insight into circumstances of the Rosenthal photograph and the impact it had on a nation at war.

Rosenthal captured the image of the second flag raising (A ranking officer saw the first flag and wanted a bigger one to fly over Mt Suribachi) as a videographer standing next to him captured it on film (see below). Note how close the video is to the photograph.

Rosenthal’s image won the Pulitzer Prize and is believed to be the most reproduced photograph in history. He died on August 20, 2006 at age 94. On September 15, 2006, he was posthumously awarded the Distinguished Public Service Medal by the United States Marine Corps.

So here’s to Joe Rosenthal.

This site uses Akismet to reduce spam. Learn how your comment data is processed.